My experiences with Rotrics™ All-in-One Desktop Robot Arm, AKA DEXARM (Avoid it!)

A well-designed machine that works very well and does what it says it will do, just don't get one. The reasons for this are not technical. This is probably not a financial sucess, the team has moved on to other things and it feels like the company is simply trying to get rid of inventory.
03 Jul 2022 - I will update this post with anything that changes regarding what is described here as this is still ongoing (I sent them another email yesterday to ask to buy a replacement motherboard including pictures of the damage I did). Lets see. 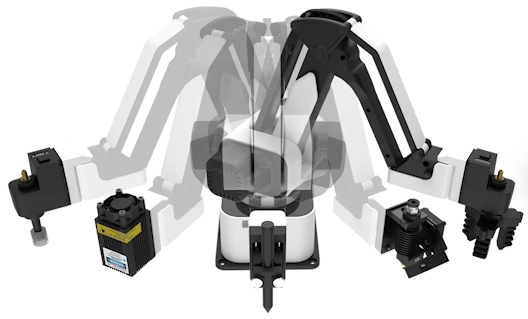 Is a cheap desktop-sized laser engraver plus a 3D printer plus a pick and place robot arm plus a robot that draws with a pen plus a "build-your-own" end effector machine too good to be true? Yes and no. Confused? keep reading. The rotrics DEXARM is such a machine and when I found it I tweeted the following:

It's been a while since I really wanted something this bad. USD1000 for this wonder? @Rotrics1 #DexArm. I'm going to get one, no joke. Watch this space. https://t.co/nofqtNt33v pic.twitter.com/G7KADZFkaY

I'm no liar so after that prophetic tweet, I got one. I went to TaoBao (like AliExpress but in China and cheaper) and I bought it like a boss. The first problems started there as I ordered the complete kit but received only the arm itself, the pick and place items, the pen and the pen holder, no 3D printer accessories, no laser which is what I really wanted. Like a boss indeed. The seller, deep down, was a good guy and it took only a little complaining to have the difference returned to me.

I then went to the official rotrics store (they're on shopify) and got myself a 2.5W laser module and the 3D printer kit. I also got the laser engraving enclosure and remember this last one because they got my money for it but I'm quite sure I will never get it.

I then I got everything I ordered except for the enclosure. I was so happy, I cried a little. I was going to start 3D printing and engraving everything. This is the start of my "golden age" of using this thing.

The dexarm works very well. The software is intuitive and does all that it says. It's called Rotrics Studio and, again, it's pretty good and versatile. 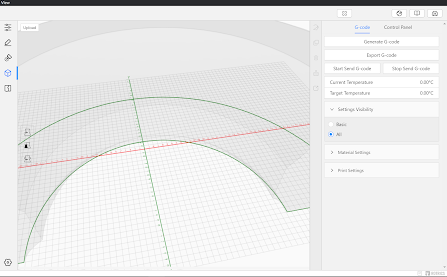 You will not get world-quality 3D prints or laser engraving but they're both more than acceptable. Here's a picture of one of my prints as it was begin made.

And here is how it looks printed and installed (the 2 flast plates), please excuse my nasty finger.

As per the laser engraving, it's pretty good too. Here's a test I did. 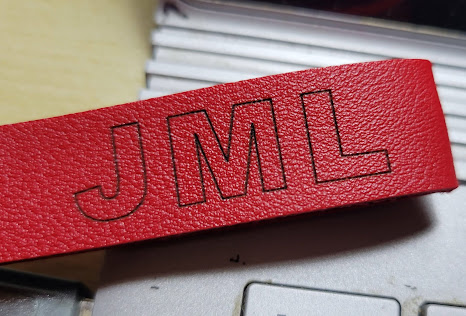 Life was like a dream at this point filled with happiness and hopes of a bright future. Then this happened and it was the end of the beginning.

Let me be clear on one thing: this was completely MY FAULT. Lets just say that a higher than usual voltage was fed through the USB port. Extreme accidental stupidity. 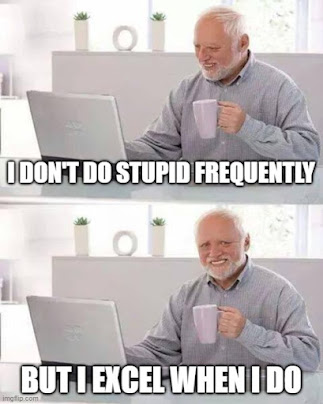 So I needed to get myself a new motherboard. 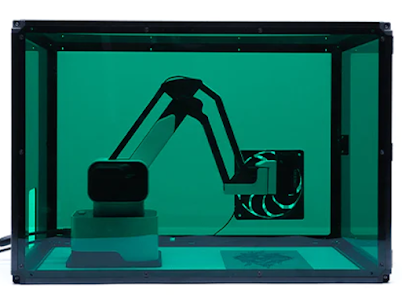 This is the enclosure of which I only saw pictures of, just like you dear reader, except that I paid to get one. Did I get a NFT?

I'll just keep all of this very short. I contacted Rotrics about getting a new motherboard and had to be really insistent. They did not reply to my first emails. I then started to email all addresses I could find and finally "Jemma" did reply to me with a rather nice tone and asked me for some pictures of the damage. I sent them to "her" - in double quotes not because of gender fluidity but rather because Jemma could be anything, even an AI. At the time I had not opened the robot yet, so there was not much to see. Strangely, all replies ceased when I asked how I could order the board. I never heard from them again. Note that I even told them they could just reply to say, "Sorry, there's nothing we can do. We don't sell replacement motherboards." I would be upset but more with me than with them as I did damage the machine, not them.

It's the f***ing silence that gets to me.

So now I have this cheap robotic arm that works very well when it has a working mother board but due to non-existent customer service it's just a large paperweight. Damn!

The forums and discord server are full of unhappy customers and I knew about it but I did think that I would risk getting the awesome machine because, really, what could happen to my unit?

I did replace that fuse and the diode that you see very obviously damaged on the picture. Unfortunately it did not solve the problem. I really need a replacement motherboard.

Unless you can get this for half price, do not get this unit. Do not get the enclosure because you will not get it.

Now let me go cry about this and see what 3D printer and laser engraving machines I'm going to get next. Any recommendations? Do leave a comment down below.

What is this about?

I'm young but I have been making stuff for years and years and years. This is where I publish some of the things I and others make and also other things that I know the whole world will find interesting. Contains mostly programming and electronics. My goal is to be rich without having to work.